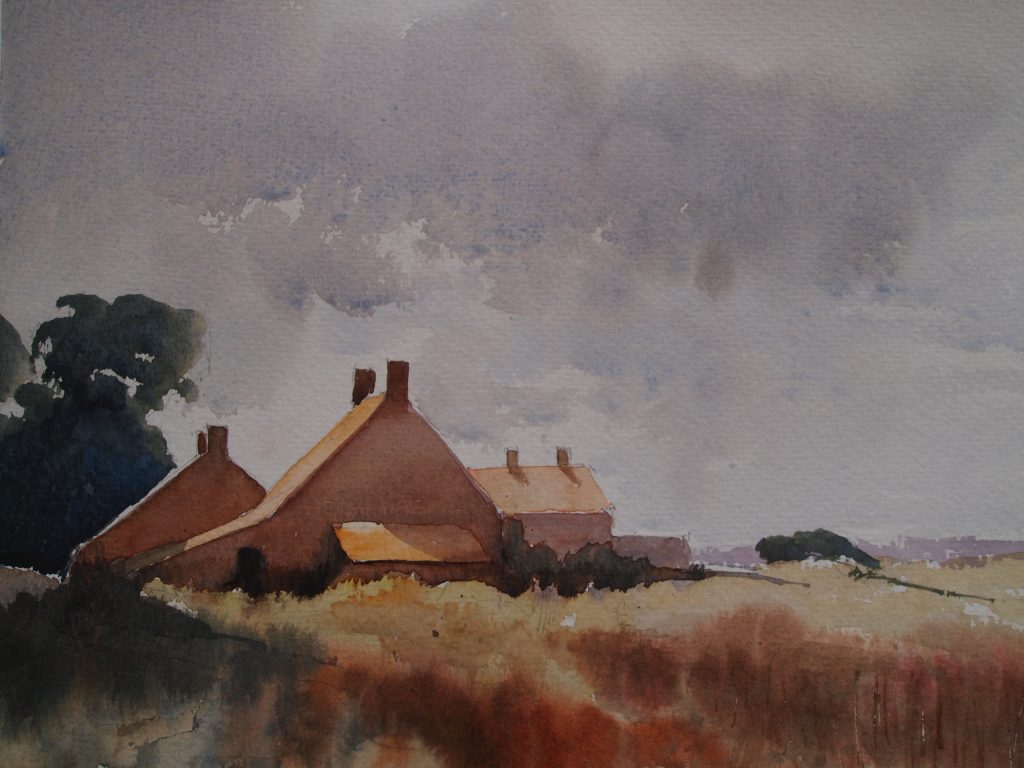 Seago is where the heart is…

As much as I’ve enjoyed my recent adventures with Rowland Hilder – which, I hasten to add, is very much indeed – it never ceases to surprise and delight me when I return to the work of Edward Seago. Emboldened by some of the success I’ve enjoyed with my recent Hilderesque efforts, I thought I’d take on the challenge of one of Seago’s wonderfully simple but-oh-so-challenging to achieve views. I’ve often admired his ‘Norfolk Cottages’ painting for its seemingly effortless purity.

Now whilst my interpretation can’t boast either the purity or effortlessness of the original, I did enjoy painting this and am pleased with certain elements. I like the sense of the light catching the rooftops, the feeling of regression in the buildings, and the directness of the foreground.

While none of this was achieved in single washes, the approach felt very different to that I’ve been using recently, which has been more about gradually building up with overlaying washes. This was a much more direct approach. If I were to try this again, I think I’d want to try to soften the tone of the trees to the right of the buildings to make them recede more and, in the foreground, I’d like to achieve a little more distinctive variation. I think the paper was a little too damp when I applied the final wash which resulted in too much bleeding between colours.

I was however pleased that a. I enjoyed painting this as much as I did and b. that when viewed from a distance, it turned out as well as it did (although I admit that this is only my opinion!)

Enthused and encouraged, and also gifted with some unexpected time, I decided to take on another typical Seago painting. What I liked about approaching this painting was planning out the necessary sequence of work, especially painting in the background trees but leaving space to add in the masts of the boats afterwards. A decision which I’m now wondering if I shouldn’t have done the other way round now, so maybe I’ll try that next time.

Taking on this subject was also a little about confronting a few fears, particularly the reflections of the boats on the left hand side.

Looking at the painting afterwards, I feel it’s a painting of two halves… one half that is okay, and one half that isn’t!  I think that there are some pleasing moments on the left hand side of the painting, for instance that the water, boats, and their reflections, are relatively believable. From the rowing boat onwards however, I don’t feel particularly convinced by any of this and don’t really feel this half of the painting contributes much to the overall image.Even with the half that I thought was successful – this isn’t without its frustrations!

For all of my recent paintings I’ve been using an Escoda Optimo travel brush no.12 – which I think is absolutely brilliant – (so much so I’ve just ordered some different sizes from the same range). I know I’m still getting used to the brush, but I’m enjoying it’s versatility and the quality of point. On this sketch, all of the masts and the rigging was done with the size 12 brush and you can see on the foreground mast that I completely overcooked one of my brushstrokes, and my eye is constantly drawn back to this error which is really annoying!

I also got carried away with the masts generally and they’re all a little too similar in height and shape / structure….and I did three identical brushsrokes to indicate the shadows in the water’s edge in the foreground which again, really draw my eye because again they’re just too similar and don’t properly relate to the river bank.

I could go on, but I’m also reminded of one of the lessons I’ve learned from reading some of Rowland Hilder’s sage advice. I can’t remember it word for word, but I interpreted it as a recommendation not to judge your painting directly against the view you’ve tried to capture – on the basis that you’ll never match, let alone better nature – but to wait until you’re home, and separated from your inspiration, where you can then judge more objectively whether your efforts have any merit. In my world, this has meant not holding up my sketches for direct comparison against Seago’s or Hilder’s originals, but to try and assess and critique them within the context of my own developing abilities.

I know this may not sound like a big deal, but I’ve found it quite transformational!

Thoughts on Seago is where the heart is…