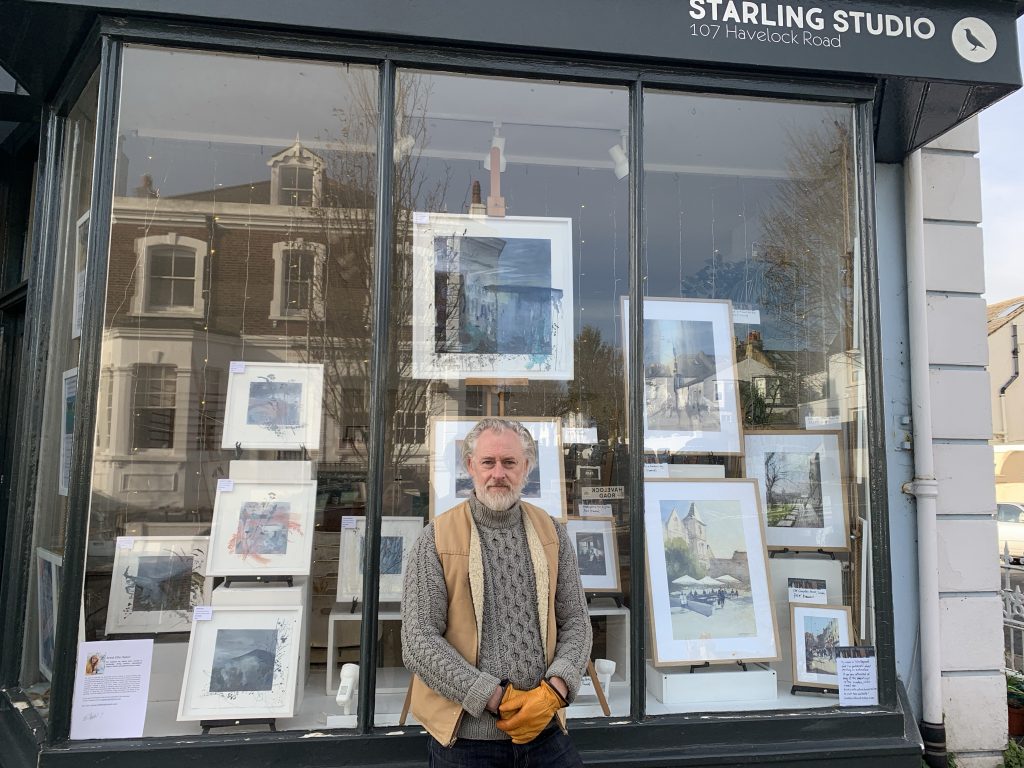 Now I know what you’re thinking:

“Whoa, who’s the grey-haired beardy guy and why’s he looking at me like that!?”

Well, it’s a very rare photo of yours truly. Now I don’t mind confessing that even I was taken aback when I saw this photo and have subsequently had an urgent haircut and beard trim!

The reason for this rare occurrence is that I managed to get my window display at Starling Studios installed at the weekend, and it seemed somehow appropriate to get a picture of myself in front of it.

I’m afraid didn’t manage to get any decent photos of the actual display because the sun was so bright and the reflections in the windows were quite extreme, so you’ll just have to take my word for it that it looks ok. Even better, if you’re in the vicinity, maybe you could stop by and have a look for yourself! If you do, I’d love to hear from you!

Even though this was set up on a bright but incredibly chilly Sunday morning, I’ve already received some positive comments from passersby which is obviously encouraging.

As I mentioned in last week’s post – I’m sharing this window with Ellie Hipkin and we’ll have our work on display here through to the 2nd January 2022.

From the 10th – 19th December, Ellie and I will also be taking over the inside of the gallery, where Ellie has also curated an excellent range of artists and makers who will join us to exhibit their work as we turn Starling Studios into a pop-up gallery to cater for all you Christmas present needs!

You can find out more information about this event, including prices and opening times, on my dedicated Starling Studios Pop-Up Gallery page

I submitted my entries to this – five in total – back in October and as far as I understood, I wouldn’t hear anything else until the final results are revealed on 22nd December.

It came as a complete surprise then to find a notification that the ‘first stage of judging’ had been completed and that, from 3,725 entrants, 300 had been selected for the final stage of judging!

The list of the 300 artists spread over six pages of results so I immediately started to scour them for my name! I was delighted, surprised and a little anxious when I found my name, or at least it was a name with a spelling very close to my name!

I found the name of a ‘John Haywaad’ which I wanted to assume was me, but couldn’t do so with formal acknowledgment so my celebrations were slightly delayed until the organisers were able to confirm that is was definitely me!

Needless to say, I’m over the moon at this news! Even to make it to a shortlist of 300 from 3725 applicants feels like a huge achievement!

The next and final stage of judging will be to determine six winners, 10 rising stars and 100 Highly Commended artists. The results of this final stage are due to be announced on 22nd December, so not too long for me to keep my fingers crossed!

As much as I’d love to go one step further than the shortlist of 300, when I look at some of the other names on the list whose work I’m familiar with, it’s hard to imagine that this will be possible. Whatever the final outcome, I need to remember that even making it this far counts as a considerable achievement.

Naturally I’ll be doing my best to keep my feet on the ground, which should be pretty easy as my to-do list for the week ahead mainly involves wrapping a large quantity of paintings up in cellophane to go into a browser for the pop up! All of this has left precious little time for painting but, just to keep the paint wet and the brushes moving, here’s a quick sketch of a street scene in Cuba:

I’m not particularly pleased with this but, with so much else going on, it’s the least of my concerns!