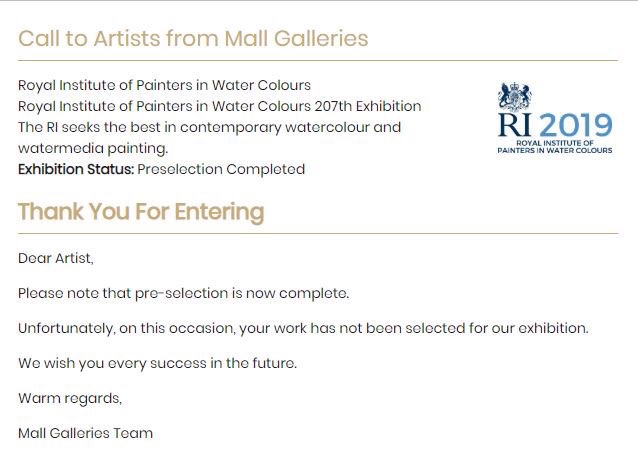 An even bigger big sky watercolour

As was hotly predicted, if not wildly anticipated, my submission to this year’s Royal Institute of Painters in Contemporary Water Colour Exhibition 2019 was met with the judges’ disapproval:

As disappointing as any rejection notification is, it also feels good to have it out of the way. It’s not that it was that much of distraction really but, having decided to make a last minute entry, I can’t deny entertaining against my better judgement the vague possibility that I might get selected.

Ah well, there’s always next year, and there’s plenty of time for practice and painting in the meantime!

After enjoying last week’s big sky painting so much, I had it mind to try a much larger version, just for fun. Just as a reminder, here’s the quarter sheet painting that I did last week:

As much as I enjoyed this, and was pleasantly pleased with the result, I felt I could have even more fun and hopefully achieve a better painting by upsizing and trying out a few slightly different approaches in different areas.

Here are a few of the changes I hoped to make:

Here’s the initial sketch I started out with:

Not a lot to see or even say about this really! There’s not a single line in the sky, but I did try an draw out the foreground patchwork of fields and main wooded areas with a degree of accuracy so that they helped to create the sense of distance and perspective that I was looking for.

Here’s how it turned out:

I started off by wetting the paper liberally as far down as the horizon line. While the paper was absorbing the moisture, I mixed up some generous quantities of the colours I needed for the sky – mainly ultramarine and cobalt blues for the blue areas of sky, and a more blue/grey/mauve mix for the clouds.

These were then all washed in liberally, following my reference photo and trying to be careful to avoid some the areas that I know I needed to keep bright white. Some of the streaks in the sky lifted out by wiping a kitchen towel tissue across the paper.

Similarly, for the highlights on the more distant clouds, they were lifted out using some scrunched up kitchen towel.

This was all done quickly and, while the paper was still damp, I dropped in more of the cloud mix that I tweaked as I went, a little more blue here, a little more light red there.

Once I reached the horizon line, where quite a ‘bead’ of paint had gathered, I removed some of this with a damp brush and then started to wash in some raw sienna and some yellow over the land areas.

In my earlier version, I added greens to the yellows wet in wet and I think this created too many blurred areas of colour, which made it more difficult to create the patchwork sense of the fields.

With this version I was more careful to vary the raw sienna and yellow wash, and to then let this dry before beginning to add in the different greens for the fields. These were all added in thin glazes, altering the mix of the green with every brushstroke as I gradually built up the patchwork effect.

Once I’d reached a stage where I felt reasonably happy, I began to added in the hedges and trees that helped define the shapes of the fields. There was then a bit of backwards and forwards-ing. A few fields here, a few hedges there.

And it was roundabout here that I knew I was in danger of overworking it so stopped for a while.

After a bit of time away, I felt that the blue area of the sky needed strengthening, which I did by re-wetting the top section of the sky, adding in some slightly stronger blue washes and then using tissue again to lift off the streaks in the sky.

The final touch was to add in some shadow areas, beginning on the horizon line, where the cloud cover was most dense, which really helped with the sense of distance.

After that, I applied some quick broad cloud shadows over the landscape – and then downed my brushes and resisted the growing temptation to do any more fiddling!

I feel like I’ve rambled on a bit here, for which I really apologise but hope that you’ll see this rambling for what it is, a sign of just how much I enjoyed working on this painting!

Thoughts on An even bigger big sky watercolour

17 thoughts on “An even bigger big sky watercolour”